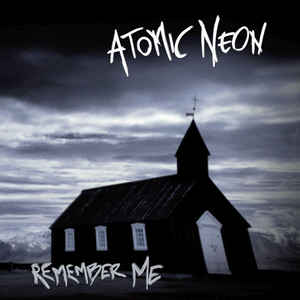 Background/Info: After having released three albums on Black Rain and one album on Holy Hour Records, German formation Atomic Neon now joined hands with Alice In… The band driven by singer Rio Black (still involved with No Trust In Dawn), ex-The House Of Usher guitarist Lars Kappeler plus 4 more members have already been active for more than 10 years.

Content: “Remember Me” is carried by good-old and pure nostalgia-like cold-wave music. It’s impossible to not have The Cure in mind when listening to Atomic Neon. Rio Black is once again reminding me of Robert Smith, but several songs feel like touched by the hand of The Cure. Other songs are closer to darker approach of The Sisters Of Mercy. The vocals are a bit different as well, becoming deeper and more depressed.

A few more songs, probably the most personal ones, reveal some dark-rock touch on top. And there also is one single track sung in German, which also is one of the attention grabbers. The work features 10 songs plus 2 bonus cuts, revealing a symphonic version and an extended version.

+ + + : This album is not that different from previous releases. You don’t listen to Atomic Neon for the originality, but for their great 80s spirit reminiscent to The Cure, The Sisters Of Mercy, The Cult, The Mission ao. They bring the dark 80s hours alive with passion and talent. I especially like the guitar playing, which has this dark magic from the cold-wave years while some passages are also a bit psychedelic-like. Singer Rio Black also remains a great and charismatic singer, which can now remind me of Robert Smith and then to Andrew Eldritch.

– – – : As I already said and often mentioned, Atomic Black is one of the numerous 80s copyists. There’s no explicit trace of originality, but we’ve to admit they bring the cold-wave style back to life with style and conviction. One thing they maybe have to reconsider is to improve the poorly inspired artwork from the album. The front cover is definitely too simplistic and that’s a pity in times CD sales are going downwards.

Conclusion: If you’re infected with the 80s cold-wave nostalgia, Atomic Neon will give you a very efficient remedy called “Remember Me”. This is a great album in its genre!