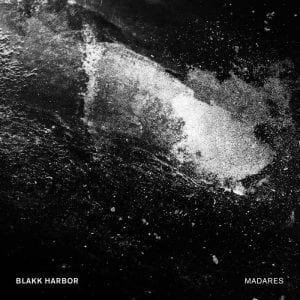 Background/Info: Behind this new project signed on Ant-Zen is hiding Greek composer Angelos Liaros. He has been previously involved with Mobthrow; a project that was signed to Ad Noiseam and released the amazing album “Unfolded” (2014). “Madares” is also available as a double vinyl album.

Content: This work is a meticulous fusion between minimal electronic sound treatments, tribal rhythms, anguished sound atmospheres and something ritual supporting a few cuts. One of the main characteristics is Eastern sphere running through the tracks and, which might appeal for fans of Muslimgauze, This Morn’Omina and M². Next to the tribal cadence you also will discover tracks with downtempo rhythms and other ones with drones.

+ + + : Blakk Harbor took me by surprise; this is an intelligent and sophisticated piece of modern industrialism. Every aspect of the work and every little detail sound right and at the right place. You get the impression the musician has been replaced by a sonic surgeon refining his work with multiple sonic details.  “Madares” also has something authentic and that’s because of the used instruments. I especially like the tribal element emerging from the composition and, which is reaching a climax at “Eastern Trails”.

– – – : This album is without a shadow of a doubt one of the best-, most creative- and accomplished productions from 2018! I don’t have any minus point to mention here.

Conclusion: Blakk Harbor invites the listener to walk throughout an obscure sound universe, which also is a refined and intelligent piece of music. “Madares” is without a shadow of doubt one of the 2018 albums you’ve to discover.