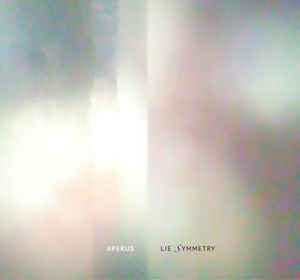 Background/Info: Behind Aperus is hiding Brian McWilliams who’s active as a musician (still involved with Remanence), photographer and running Geophonic Records. McWilliams is living in the high desert of New Mexico (USA). He already released several productions and this year unleashed his newest creation.

Content: “Lie Symmetry” is carried by down-tempo rhythms, which are mixed with a noticeable ambient sound and an experimental touch on top. Sometimes a tiny ritual-like (cf. “Himalaya”) and always revealing mysterious sound atmospheres, the tracks have something cinematographic-like. The tracks have been progressively built up, reaching certain climax at “Ephemeral River”.

+ + + : I first of all like the diversity of the work; this is not just an ambient or soundtrack-inspired work. It’s much more than this, but definitely inspired by ambient work. The tracks have been composed with great sound treatments and field recordings. It sometimes creates a strong visual appeal, giving me the view of an obscure sonic labyrinth. A dark sensation created by anguished crashes, echoing sound treatments and low, resonating vibes are coming to an ecstasies at the aforementioned “Ephemeral River”. Last, but not least there are interesting infos about the album, instruments, field recordings in the small booklet.

– – – : This is fascinating piece of work I fully enjoyed, but I think this artist can still do better.

Conclusion: Aperus is a great discovery, mixing different sonic ideas, which will appeal for demanding and exigent ambient lovers.