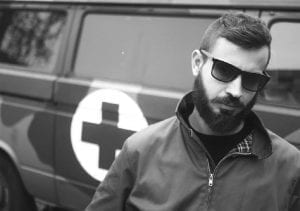 The Greek artist Angelos Liaros got previously involved with Mobthrow, which he defines as a dubstep project. Especially the second and last album of Mobthrow (cf. “Unfolded”) released in 2014 on Ad Noiseam was nothing less, but a masterpiece. Blakk Harbor is the newest sonic brainchild of this artist. The debut album “Madares” released on Ant-Zen is a new masterpiece revealing different influences, but confirming the genius of the artist. No doubt about it, “Madares” is one of the best albums I’ve heard in 2018!

Q: What has been your initial goals to set up Blakk Harbor and are you still involved with Mobthrow?

Angelos: Blakk Harbor is a fresh project and personal vinyl imprint focusing more into drone, industrial and experimental techno territories. I wanted to have a new fresh start with this project, explore new territories and have a different approach in my sound. Mobthrow has been a dubstep-era project strongly related with Ad-Noiseam label and all of that three ceased together.

Q: The Blakk Harbor sound clearly reveals a truly passion for good-old analogue gear, but still for authentic instruments (from your native country I think). How did you come to mix it all and how do you look back at the writing- and recording process of the album?

Angelos: True, “Madares” is made of sampled folk Cretan instruments granulized to death via analogue synths and hardware. All these years listening to folk musicians in Crete I was remixing these tracks in my head. There is a pagan, ceremonial and darker sound lying beneath these old folk tracks and I wanted to bring that at the surface with a modern electronic twist.

Q: I noticed you’re based in Berlin, which is a kind of ‘sonic epicenter’ when it comes to visionary artists and new music trends etc. Did you feel any impact of what you’ve heard and seen in Berlin on your music and what kind of work did you want to accomplish?

Angelos: There is for sure some impact in the direction of what’s going on in electronic music, new music trends and current status that help me to be updated with the scene. But creatively I would say Berlin is a stagnant place for me. I get all creativity from landscapes, sea, mountains, ancient monuments and the impact of previous civilizations. The monoliths that withstand time forever. In that sense Berlin is a very flat place for me in many ways.

Q: Sound-wise “Madares” is hard to label as a music genre and rather sounds as a truly fusion between different styles; from tribal to techno to IDM to industrial; a bit like the imaginary hybrid between Muslimgauze, M², This Morn’Omina… and Mobthrow. How would you analyze “Madares”?

Angelos: “Madares” is a very atmospheric album. It is dark, drony, experimental and industrial. I always had a lot of influences; as a musician I started as a death-metal guitarist and gradually moved towards electronic music. Even if sometimes it’s risky I choose to carve my own, unique music path and not to attach to certain subgenre labels.

Q: Next to the CD-format released by Ant-Zen you self-released “Madares” as double vinyl, right? What makes this growing interest for vinyl and don’t you think it’s not just more than stuff for collectors?

Angelos: Vinyl is just a collectable item nowadays for most people indeed. They put it aside, get the download code and listen to your music digitally. But it’s still very prestigious, the ultimate physical format with its huge artwork, a perfect memento from the artist you love. It needs a lot of time, efforts and money to make a vinyl record come true. I think people in the end maybe recognize this and support it, but yes it’s not for everybody I guess.

Q: Music seems to have a real predominant place in your life; next to composing music you’re also working as sound designer for ‘Native Instruments’. What is this job all about and in, which way has it an impact on your work as musician?

Angelos: It’s mostly creating sample packs, synth presets and giving a direction to software instruments along with the team of course. It’s very funny when I hear well-known artists out there making a career with my presets and beats. Personally in a technical level it made me better and far more skilful, but it also pushed me back to hardware equipment and analogue synths cause I don’t want to see another software synth in the PC screen in my life hehe.