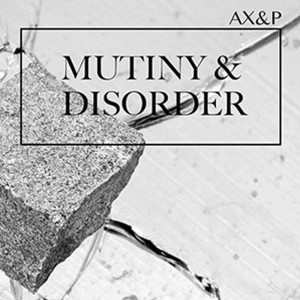 Background/Info: Behind AX&P is hiding Adam Mitchell (Adam X and owner of Sonic Groove) and Ali Wells (Perc and owner of Perc Trax). Both artists already joined hands in 2013 unleashing the 12” Ampere&Ohm. “Mutiny & Disorder” is their newest creation featuring 2 songs.

Content: The main influence clearly sounds techno-driven, but AX&P are not dealing with the classical techno standards made of cheap tricks. Both songs reflect a dark approach mixed with minimal and industrial sound components. The spooky, whispering vocals on “Mutiny” clearly reinforce the minimalism of the production.

This production incited me to discover their first EP, which was more into usual techno fields. “Mutiny & Disorder” reveals rawer sound treatments while the composition is more sophisticated.

+ + + : This is an intelligent and chilling format of techno music. The sound is accessible for a wider audience and I’m sure industrial- and EBM heads are goig to like it as well. The industrial element sounds terrific. “Mutiny” is a masterpiece!

Conclusion: AX&P will take all myths away concerning techno music! Techno can be still dark and even a bit tormented while holding on to the typical danceable vibes of the genre.