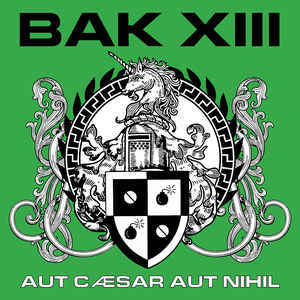 Background/Info: The Swiss formation Bak XIII has released their 8th full length in 13 years. They always have mixed different 80s elements like new-wave and electro-pop in a rather cool way, but unfortunately the band never gained the deserved recognition.

Content: “Aut Cæsar Aut Nihil” (cf. “either Fout! De hyperlinkverwijzing is ongeldig. or nothing”) remains pretty faithful to some typical 80s influences Bak XIII has used to compose. I can’t say there’s a move towards new sonic paths although the work sounds more diversified than previous releases. The guitar playing is really powerful on some songs while other cuts are getting back into the typical electro-pop bleeps from earlier releases.

Bak XIII has found the right balance between all influences and didn’t really hesitate to experiment with a few other elements like punk and rock. Nothing is weird enough for this band. I sometimes got the impression of hearing Scooter meeting Apoptygma Berzerk while another cut comes pretty close to Welle: Erdball.

A similar eclecticism is also featured in the vocals, which are now robotic and more enraged. The lyrics –sometimes dealing with totally crazy and/or cynical themes, are mainly sung in English, but also in French and Spanish.

+ + + : Bak XIII remains pretty faithful to their creative spirit, which is covering multiple influences. I like the switch from harder cuts to softer dance-pop tracks with a commercial flavor on top.

– – – : Diversity is cool, but I can imagine it’s not always easy to grasp for listeners and especially if you’re not familiar with this band.

Conclusion: This album is absolutely worthy of examination for its retro approach and its diversity. Bak XIII definitely deserves more international recognition.