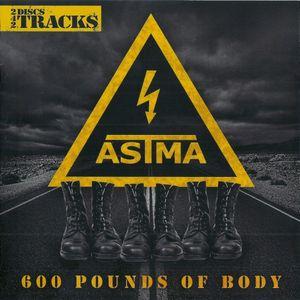 Content: Astma is a familiar name at the wider fields of EBM. This Swedish formation is not what I would call a leading band in the genre although an interesting combo dealing with hard EBM since 2001, which gained some reputation from their live performances.
Electro Aggression Records gave them the opportunity to release an official full length featuring 23 (!) songs plus an extra disc with some great remixes.

If you’re not familiar with Astma, you can imagine an hybrid between Orange Sector and Pouppée Fabrikk. This is a rather classical ‘hardcore’ version of EBM, which sounds in the purest tradition of the genre. There’s no real innovation, but this kind of EBM definitely appears to be vaccinated against any new element. You better prepare yourself to ‘move your body’ with the 23 (!) songs of the main disc. The tracks are pretty short – in the 2- 3 minute range, but driven by maximum injection of testosterone.

The sound formula is no longer a secret for EBM lovers. You get a fast cadence joined by dry bass lines and some extra metallic percussion plus heavy shouting vocals. It’s as simple as that and it still works. I however can’t say that Astma has the potential to become a new sensation in the genre, but they have the power to make you move. In the end I would say that this is exactly what we expect from this kind of music, isn’t it?

Behind the ‘cliché’ Astma tries to put their own stamp on the EBM sound. It’s not exactly about their sound, but some of their funny lyrical parts, which are more into punk. “Cut It Short” is one of these songs, where they sing about wanting to cut the hair of hippies. One of the hardest cuts is the so-called “New Version” of “A Global Game” featuring a weird chorus about football. Another funny cut is “Body In Japan” for the mishmash of Japanese words. It doesn’t mean that much, but it’s pure fun and it works.

One of my favorite songs is also one of their most elaborate. Astma added a cool, raw lead on “Suffer And Pain”, which adds more elements to the song although it still remains a pretty simple and efficient. I just regret there are no more variations in the songs like on this track.

In my opinion, one of the best remixes is the one of “Mr. Miller” by Full Contact 69. This is not exactly the most famous name on the list, but maybe the most creative one revealing a minimal EBM touch reminding me a bit of PNE. Other noticeable remixes have been accomplished by Plastic Noise Experience, Autodafeh and Invoke The Insult. The bands injected their own touch to the work, which brings more diversity to this disc.

Conclusion: A stereotypical-, but solid EBM release with an impressive list of remixes.