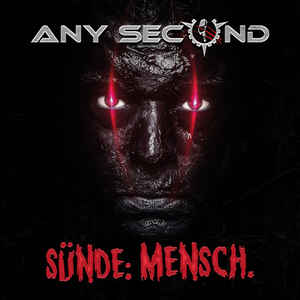 Background/Info: Set up in 2010 by Jan Kluge (vocals) and Thomas DosUnit the Berlin duo self-released the album “Dein Schicksal” in 2012. They were joined in 2016 by Oliver Senger (Agonoize) and started writing new material. “Sünde Mensch” is the first official album from Any Second and features an extra disc with remixes.

Content: The sound and influences of Any Second are somewhat 90s like and clearly reminding me of bands such as Tyske Lüdder, Der Prager Handgriff and Calva Y Nada. They bring a powerful mix of dark-electronics and pure EBM sung by charismatic vocals. Most of the vocals are sung in German.

+ + + : No doubt about it, this is a ‘typical’ Out Of Line production that will appeal for lovers of dark-electronics and EBM. Any second moves somewhere in between and clearly evoke good-old 90s influences. The songs are well-crafted and feature several great cuts. I especially want to tip “Seelenhügel”, which appears to be a real potential hit. The powerful and charismatic vocals are sometimes reminding me of Tyske Lüdder.

Among the remixes I want to say a word about the great job done by [:SITD:] (remixing “Seelenhügel”) and Tanzresonanz (a band I remember from an ‘old’ Out Of Line-compilation entitled “Electrostorm Vol.6”).

– – – : I noticed a few ‘softer’ cuts, which are not the most captivating ones from the work. Sound-wise Any Second avoids all innovation, but I have to admit they accomplished an efficient production.

Conclusion: This is the kind of band that will appeal for multiple electro-heads passionate by EBM and dark-electronics. Nothing new although a cool work!