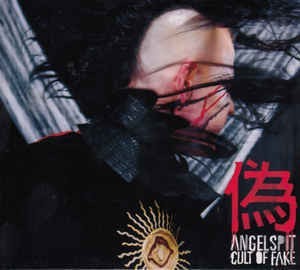 Background/Info: It’s now 10 years ago that Angelspit released their debut-album “Krankhaus”, which became an instant hit and the start of a successful career. The band from Sydney (Australia) found a new home at Negative Gain to unleash their new album.

Content: The sound formula of those cyber-punks didn’t really changed, but there’s no reason at all to change an efficient receipt. Angelspit remains animated by hard-driven electronics and muscled guitar riffs. Multiple electronic effects and raw sound manipulation both are the essence of “Cult Of Fake”. There’s a real impressive arsenal of sounds and noises that have been used. It sometimes sounds a bit anarchistic-like, but it also confirms a kind of sonic-punk attitude.

A few more elements like technoid passages, electroclash parts and a kind of industrial-pop touch can be noticed as well. I sometimes get the impression that Angelspit sounds like the offspring between Faderhead and Komor Kommando with an extra powerful boost on top. A few arrangements even move into pure epic bombast. On top of it all you get the alluring and diversified vocals of Zoog Van Rock.

+ + + : The main strength of Angelspit always has been their very unique electro-punk approach and “Cult Of Fake” simply holds on to that formula. There’s no other band like Angelspit. Their sound creation sounds weird and without any single compromise. They sound like they are living on a distant music planet and are mixing many different influences together. I especially get under the influence of the multiple and archaic-like sound manipulations.

– – – : If you’re into their cyber-punk sound you’ll not exactly find minus points at this new work. I just regret there are no more explicit hits featured on it. The sound formula of Angelspit is no longer surprising and that’s maybe an aspect they’ll have to work on for the future, but once again, there’s no real good reason to change a successful sound.

Conclusion: Angelspit is black or white; you’ll like or dislike their sound, but there’s no compromise! “Cult Of Fake” is a new solid piece of modern punk-music driven by furious electronics.