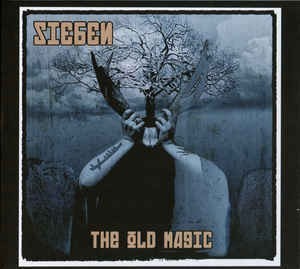 Background/Info: Matt Howden aka Sieben is an artist who gained a respectable reputation as violinist. Based in Sheffield (UK) this musician is already been active for numerous years now and has worked together with many other artists (even with his own father) while he recently together with Jo Quail set up a new project called Rasp. “The Old Magic” is an album featuring 8 songs and gets back to the EP-trilogy “Lietuva”, “Norse” and “Briton”. Matt Howden is not just playing the violin, but he also takes care for fascinating concepts getting us back into history and old rites.

Content: Matt Howden is playing the violin his very own way. It’s not just playing, but mainly experimenting with violin sounds he manipulates to create a unique sensation. The final result mixes deep and sensitive violin parts, intriguing atmospheres and a ritual aspect ending into a kind of soundtrack creation.

Matt Howden also is a talented singer who injects true passion into his work. It creates a dramatic approach, which I think totally fits to the global and lyrical concept. “The Old Magic” takes us away to melancholic passages on one side, but still into pure reverie on the other.

+ + + : Evoking poetry makes us directly think about beautiful words and rimes, but Matt Holden has a mystic power to transform music into poetry. He remains a visionary artist transforming familiar neo-classical music into a kind of future-classical-music. This a sound universe where his instrument can speak revealing to us the secret of old rites. I especially like the diversity of the work, which is only created by one single instruments and the magic of transformation by effects. This album also confirms the great vocal skills of Matt Howden.

– – – : One of the main regrets about this work is that it only features 8 songs. I simply wanted more tracks and more emotions. Matt Howden is not reinventing his work and is not into innovation so in the end you might have a déjà-vu effect.

Conclusion: The title of this album perfectly summarizes the essence of the sound; music has to be into the power of magic and Matt Holden clearly appears to be a sound magician or simply a poet playing violin instead of an acoustic guitar.