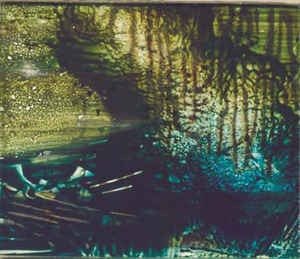 Background/Info: This work is collaboration between Andrew Chalk, Ralf Wehowsky and Eric Lanzillotta. These are artists who have already been active for many years now, rather operating in hidden corners of experimental- and abstract music. “Yang-Tul” reveals 2 long duration cuts. The painting on the front cover was made by Andrew Chalk who also is the most familiar name from the trio. Notice by the way that the original version of this album was released in 1998 on Anomalous Records.

Content: The sounds of the first cut were originally created and provided by Ralf Wehowsky and reworked by Andrew Chalk. It feels like going through an endless sonic tunnel in the composed in the purest soundscape format.

The next cut sees Ralf Wehowsky decomposing and reworking sounds originally created by Andrew Chalk and Eric Lanzillotta. This cut is more elaborate revealing iron noises and a cool mix between ambient and industrial elements. It also appears to be pretty experimental featuring great field recordings (or samplings).

+ + + : “Yang-Tul” sounds like visiting the sound laboratory of 3 sonic engineers specialized in abstract sonic creation. I especially like the second cut, which is more elaborate and made of fascinating sound manipulation.

– – – : The opening cut is cool for a while, but starts to get a bit monotonous.

Conclusion: I like this kind of collaboration getting different artists together to focusing on an intimate and somewhat mysterious goal. I however think there’s more potential in this collaboration then what came out of it.