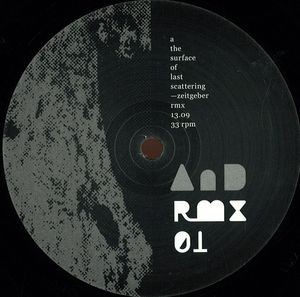 Content: AnD was set up by Manchester based duo Andro (Andrew Bowen) and Dimit (Dimitri Poumplidis). Both producers have been active for a couple of years and have already released an impressive number of EPs and 2 albums as well.

This vinyl features remixes from 2 songs originally released on the last year’s released full length “Cosmic Microwave Background”. The A-Side features a remix of “The Surface Of Last Scattering” by Zeitgeber, which is an impressive piece of dark techno-minded music. The remix progressively builds up and moves over the 13 minutes. This version reveals deep sounds and an upcoming tempo joined by mysterious sound spheres.

The B-side features 2 remixes of “Power Spectrum”. Both remixes are a fascinating piece of electro-industrial music merged with technoid elements. The remix by Sleeparchive (Roger Semsroth) sounds pretty underground-like and might appeal to lovers of Soman. The remix by O/H sounds like pure chemistry between industrial- and techno music while a few female spoken-like words on top inject a scary feeling.

Conclusion: This 12” is a great offspring between dark electro- & industrial elements plus techno music. It makes techno music accessible for a wider and somewhat electro-underground audience.