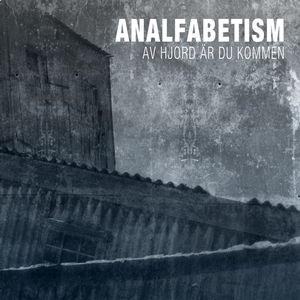 Background/Info: Behind Analfabetism is hiding Fredrik Djurfeldt, who’s an artist who gained a reputation in the Swedish and international EBM scene. Djurfeldt got involved in bands like Severe Illusion and Instans.

I like such an eclectic artist switching from EBM into dark-ambient and who reminds me a bit of his famous compatriot of Henrik Nordvargr Björkk. After a self-released debut album Analfabetism now joined the established Tumor (Malignant Records) label to unleash its official debut album.

Some overwhelming and heavy sonic waves are literally coming down like a merciless torrent. The work progressively becomes darker and intriguing till reaching a kind of ritual apotheosis (cf. “I Vredens Tid”).

The album has been remarkably built up with a perfect balance between oppressive, dark atmospheres and industrial sound components. There also is an interesting turmoil of noises and samples fully accomplishing the composition.

↓↓↓: I’m not always convinced with the multiple noise treatments, but it here concerns only a few passages.

Conclusion: “Analfabetism” is clearly not into sonic poetry, but exposes the listener to the most terrible and yet irrational degree of angst. This is the point where dark-ambient music turns into art.