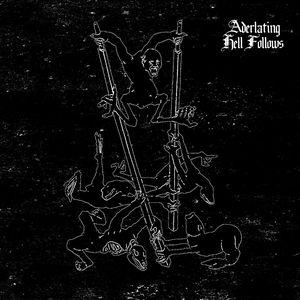 Background/Info: The duo Eric Eijspaert – Maurice De Jong better known as Aderlating are back on track with a new, obscure piece of work. Aderlating has released a considerable number of releases since 2009 while this is their 2nd album on Black Plagve.

Content: “Hell Follows” feels like entering the sound cabinet of rarities. This band composes pure ghost-music, which is accomplished by obscure passages and desperate atmospheres. The title of the album clearly reveals the deadly inspiration behind this work.

The sources of inspiration have been transposed into menacing sonic manipulations leading to hostile atmospheres, which are reinforced by mysterious spoken vocals. The somewhat ritual cadence accentuates the mystery of this work while a few epic arrangements bring the tension to a maximum level.

You clearly feel a kind of nihilistic vision, where death becomes stronger than life. Aderlating are real experts in the creation of sick and tormented ambient music, which can’t leave you unaffected.

↑↑↑: The album has a strong impact leading listeners into an imaginary vision of horror and despair. I like the diversity of the tracks.

↓↓↓: The ritual aspect of their work is not as present compared to some previous releases and that’s an element I’m missing here. A few cuts are abruptly interrupted, which is not my favorite element of the album.

Conclusion: “Hell Follows” is the kind of work that can’t leave a listener unaffected. This is a dangerous sonic experience awakening evil forces and leading the poor listener into a state of paranoia. That’s precisely what we might expect from a great dark-ambient opus.

Best songs: “Curse”, “Golden Straems”, “From The Mouth Of Gods”.