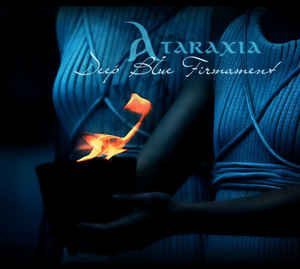 Background/Info: Italian formation Ataraxia is a veteran of the ethereal scene. “Deep Blue Firmament” is their 25th album in history, but the first one released on the Greek label Sleaszy Rider Records. Notice by the way that the new opus is also available in digipak format featuring one extra song.

Content: The work of Ataxia always has had an elevating power and it’s not different with the new work. The music becomes a kind of dream taking the listener away throughout imaginary fields guided by the unique vocals of Francesca Nicoli. Her particular timbre of voice is easy recognizable and still remains one of the main strengths of Ataraxia.

From beautiful reverie to ethereal ballads, other passages will lead you throughout a sacred dimension. Sometimes melancholic, sometimes like composed for a movie soundtrack, “Deep Blue Firmament” is sonic poetry.

+ + + : Ataraxia is not reinventing their sound and they don’t have to! They excel in this graceful writing mixing acoustic instruments and keyboards. It’s an artistic creation revealing a few new master songs and I especially want to recommend “Delphi” and “Alexandria Pt. 1” both for their delicious reverie content. Another attention grabber is “Galatia” for its troubadour style while featuring great guitar playing. The vocals of Francesca Nicoli inject this magic touch, which sounds like a delicate caress for the soul. The male backing vocals create a perfect fusion with her voice on “Alexandria Pt. 1”. The lyrics have been once more sung in different languages, which remain an exciting aspect of the band. A last song I want to recommend is the more sacred-like “Vertical”.

– – – : Ataraxia has lost a bit of their original magic, but that’s mainly due to their long existence.

Conclusion: Ataraxia is one of those bands we really have to be thankful for. This new and artistic album brings magic and emotion.