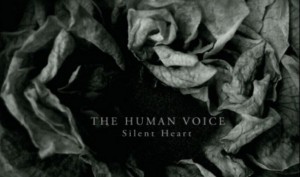 Background/Info: Behind this dark-ambient project is hiding Hærleif Langås, who gained some recognition as Northaunt. He got involved in other projects like The Human Voice, which released its debut album “Exit Lines” back in 2008 by Eibon Records. We here get the new album featuring only one cut.

Content: “The Silent Heart” reveals an intriguing sonic adventure throughout numerous ghost-like passages accentuated by sampled voices. The work has been conceived as multiple parts, which cross each other to progressively reach a dark and austere atmosphere characterized by a vision of doom. The work reveals dense and cold sound layers plus multiple experimental treatments and cracking noises.

It’s not exactly what I should call an anguishing enterprise rather than an open-minded ambient work where obscure passages progressively move into a softer and more reverie-like format. It ends in a rather cinematographic approach.

↑↑↑: I like the diversity of the composition, which is more than simple dark-ambient music.

↓↓↓ : It’s pretty entertaining, but definitely not the most exciting work in the genre. Speaking for myself I prefer the debut album.

Conclusion: “The Silent Heart” appears to be a ‘sweet’ dark-ambient work, which sounds like opening a door to softer and more dreamy passages.

Since you’re here … … we have a small favour to ask. More people are reading Side-Line Magazine than ever but advertising revenues across the media are falling fast. And unlike many news organisations, we haven’t put up a paywall – we want to keep our journalism as open as we can. So you can see why we need to ask for your help. Side-Line’s independent journalism takes a lot of time, money and hard work to produce. But we do it because we want to push the artists we like and who are equally fighting to survive. If everyone who reads our reporting, who likes it, helps fund it, our future would be much more secure. For as little as 5 US$, you can support Side-Line Magazine – and it only takes a minute. Thank you. The donations are safely powered by Paypal.
Tags: The Human Voice