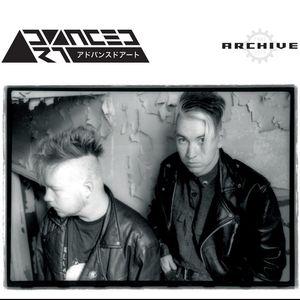 Content: All EBM lovers and especially those that were already into EBM during the 90s for sure know Advanced Art. They were considered the pioneers of the Finnish EBM and according to me a serious answer to the Swedish EBM formations. The band was active in between 1985 and 1995 and released many noticeable productions.

Both official albums (cf. “Product” 1993 and “Force” 1994) released by Poko Records featured great EBM cuts. The band finally split in 1995. A few songs have been written later on, but nothing really new happened.

I was not totally surprised that EK Product was the label to release this “Archive”-CD, which is a kind of retrospective. The sound of Advanced Art is totally appropriated for the EBM taste of the Italian label, and Vince is already familiar with the label as he’s a member of Impakt!

The main disc entitled “Forward” features 17 songs that were originally released on both of their albums and the 12” “Scar” plus the CDS “Time”. This is a great opportunity to get back to one of Side-Line’s favorites EBM bands of the 90s. They didn’t reach the absolute top of electro-underground music, but let’s not forget that the 90s have been really prolific when it comes to mention great EBM formations.

The sound of Advanced Art was characterized by harsh and unpolished percussion joined by typical fast sequences. The sound was dark and rough, but the main strength probably was the unique sound DNA. Once you’ve heard Advanced Art you simply kept it in mind. Songs like “From Nothing To Nothing”, “Wake Up”, “No Answers No Solutions”, “Lies” and “Flesh” simply belong to the collective memory of 90s EBM. I haven’t heard those songs in years, but they still have the magic and original power of the debut.

A few songs are a little bit suffering from the weight of time, but you don’t hear me complaining. When you realize that listening to Advanced Art is like going back in history of EBM and awaken when numerous young EBM lovers were not even born, you’ll seize the importance of this work.

The only ‘new’ thing might be both last cuts that were released in 1998 at the compilation “We Control You’. Both songs are not exactly the best stuff the band has ever written although I enjoyed the final song “Free World” that features female backing vocals.

The 2nd disc is something really special for the fans. This album is entitled “backward” and features a total of 20 songs. Jana and Vince took us back to explore the rarities of the band. This is a nice selection of 7” songs, demo tracks and live songs. There also is the previously unreleased “Some Time” which was originally recorded in 1994. I can’t say that this is the most exciting work of the band although it’s a real cool selection of cuts totally matching with the “Archive”-concept of the work.

The most interesting cuts are the 7” songs which bring us back to the late 80s. I never heard those tracks before so this is a great opportunity to discover the early work of Advanced Art, which sometimes became more electro-pop orientated. That’s exactly the same feeling I got with the demo tracks while the live cuts reveal a rather cool mix and sound quality.

Conclusion: This is a fascinating production and the CD format once more confirms that sound and information (booklet) are essential tools to satisfy the music lovers.

Best songs: “No Answers No Solutions”, “From Nothing To Nothing”, “Lies”, “Flesh”, Wake Up”, “Tear Open These Scars”.

Since you’re here … … we have a small favour to ask. More people are reading Side-Line Magazine than ever but advertising revenues across the media are falling fast. And unlike many news organisations, we haven’t put up a paywall – we want to keep our journalism as open as we can. So you can see why we need to ask for your help. Side-Line’s independent journalism takes a lot of time, money and hard work to produce. But we do it because we want to push the artists we like and who are equally fighting to survive. If everyone who reads our reporting, who likes it, helps fund it, our future would be much more secure. For as little as 5 US$, you can support Side-Line Magazine – and it only takes a minute. Thank you. The donations are safely powered by Paypal.
Tags: Advanced Art