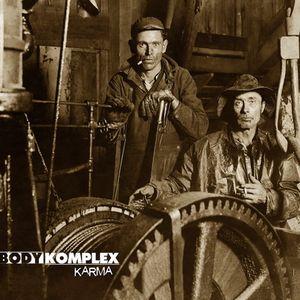 Content: Bodykomplex is one of the new-coming bands in the fields of EBM. The Finnish duo was set up in 2012 and were composing EBM songs for fun. I think that’s the right spirit to start off and 3 years later they’ve now joined one of the supreme labels of EBM: EK Product.

“Karma” features 14 pretty short songs. All the songs are in between 2 and 3 minutes. It’s pretty EBM-like as well and there also is a kind of parallel with punk songs. I guess it’s not a coincidence if Bodykomplex mention punk as a possible source of influence.

Bodykomplex indeed deals with good-old ‘retro’ EBM, which will remind you of bands like DAF and Orange Sector. There’s a similar and typical 4×4 structure carried by fast and dry bass lines and a linear, pogo-like cadence. The sound is simple, but efficient. The main particularity of the band is the language as all the songs have been sung in their Mother tongue. Finnish is a quite particular language, which in a way still makes the strength of the band. And even if you don’t understand a single word of the lyrics (which seem to deal about stories of the daily life) there still is a carrying force emerging from some of the choruses.

Musically Bodykomplex doesn’t innovate, but reveals to be a talented young formation. This album doesn’t really sound like an official debut. You can feel certain maturity and even a personal touch, which in a way makes the difference with the aforementioned major bands. Several songs feature a simple, but efficient string passage. It injects a kind of melody line, which sounds like accomplishing the songs by an extra, but important element.

Conclusion: “Karma” is an album that will ravish the EBM community and it’s really good to have this new band on board. It’s also a bit symbolic to see EK Product releasing the “Archives”-album by 90s Finnish EBM proud Advanced Art while Bodykomplex might be seen as a potential new revelation.

Since you’re here … … we have a small favour to ask. More people are reading Side-Line Magazine than ever but advertising revenues across the media are falling fast. And unlike many news organisations, we haven’t put up a paywall – we want to keep our journalism as open as we can. So you can see why we need to ask for your help. Side-Line’s independent journalism takes a lot of time, money and hard work to produce. But we do it because we want to push the artists we like and who are equally fighting to survive. If everyone who reads our reporting, who likes it, helps fund it, our future would be much more secure. For as little as 5 US$, you can support Side-Line Magazine – and it only takes a minute. Thank you. The donations are safely powered by Paypal.
Tags: Bodykomplex