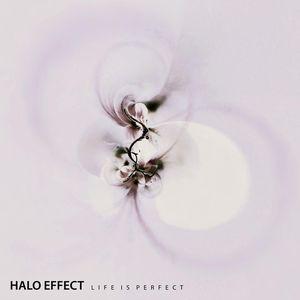 I was not a huge fan of the previous work of Halo Effect although I have to admit that their revealed an interesting mixture of pop and EBM elements. This band is already active for several years and so it’s hard to say it’s all about a growing maturity rather than a more intelligent approach in the global production aspects of “Life Is Perfect”. It’s often more intelligent to be patient achieving new songs with a lapse of time between 2 albums.

The influences remain pretty similar, but the balance between these influences never has been perfect. From the somewhat Front 242-like inspired “The Killer In Me” to the rather De/Vision-minded “You’ll Never Catch Me” there clearly is a way to go and yet both songs have been composed by the same band. That’s precisely what makes the strength of this work and where Halo Effect has found the harmony. You don’t really get the impression that this band is switching from one influence to another one. It all has been meticulously merged together. The best song to catch the secret formula of this work maybe appears to be “Dancing Lights”, which reminds me a bit of the period where X Marks The Pedwalk was moving from its early dark-electro & EBM work to a more techno-body style. “Dancing Lights” is an excellent piece of danceable electro-pop carried by a great melodic line.

Halo Effect is not reinventing electro-pop music, but seems to have found its own path to move on. Most of the songs don’t really reveal complex structures, but there’s just a great efficiency in the sound sculptures, melodic passages and danceable body-pop vibes. A few tracks are more into melancholia and even a kind of feel-good style.

I’m here referring to “Again”, which sounds like the right live song to put your hands in the air and sing along.

Conclusion: “Life Is Perfect” is not what I would call a groundbreaking album, but a fully enjoyable and successful production featuring many cool songs.

Since you’re here … … we have a small favour to ask. More people are reading Side-Line Magazine than ever but advertising revenues across the media are falling fast. And unlike many news organisations, we haven’t put up a paywall – we want to keep our journalism as open as we can. So you can see why we need to ask for your help. Side-Line’s independent journalism takes a lot of time, money and hard work to produce. But we do it because we want to push the artists we like and who are equally fighting to survive. If everyone who reads our reporting, who likes it, helps fund it, our future would be much more secure. For as little as 5 US$, you can support Side-Line Magazine – and it only takes a minute. Thank you. The donations are safely powered by Paypal.
Tags: Halo Effect