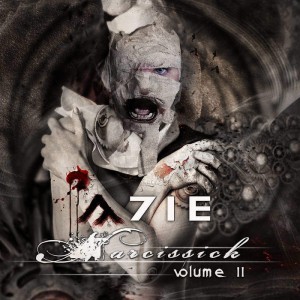 Background/Info: French dark-electro formation A7ie has a clear and solid strong ‘sick music for sick people’! the band has already been active since 2005 and rapidly became one of Advoxya Records’ flag holders. One year after the last full length album “Occidere Mundi” this new opus features remixes from several cuts of this album plus two extra songs.

Content: If you know the violent and obscure dark-(h)el(l)ectro approach of A7ie you for sure will recognize this strong fundament running through the remixes. These remixes have been made by dark-sonic troops featuring Acylum, Cold Therapy, Vault 113, Venal Flesh, Die Braut, Alien Nation, Archazard, Controlled Collapse, Thornsectide, nolongerhuman, Hasswut and Brain Over Dust.

All of the bands hold on to the tormented sound atmospheres, which sometimes remind me of :Wumpscut:, but a few bands even added a very strong personal touch to the original version. Acylum and Die Braut both did a real impressive job.

This work also reveals two alternative versions of previously released songs. Especially the “V2.0” version of “Show Me” is a noticeable cut.

+ + + : “Narcissick Volume II” is an album for the fans of A7ie. It doesn’t bring real new songs, but several noticeable remixes by other dark-electro formations. There also is a limited edition featuring an extra 7” with two remixes by :Wumpscut: and a box format with a lot of fan material.

A7ie remains a terrific dark-electro act, which clearly inspired most of the remixers like the aggressive remix of Acylum, the club-minded remix of Vault 113, the stomping remix by Die Braut, the :Wumpscut:-like remix by Alien Nation and the anguishing sounding remix by Hasswut.

– – – : Remixes can be cool and are a way to bring bands together, but A7ie likes to abuse this formula and that starts to get a little bit boring. After “Narcissick” (2001) we get a second volume with remixes while every single album still has its load of remixes. More original work and less remixes would be just fine!

Conclusion: If you like A7ie and you’re fond of remixes, don’t hesitate to get your hands on this dark-electro production.