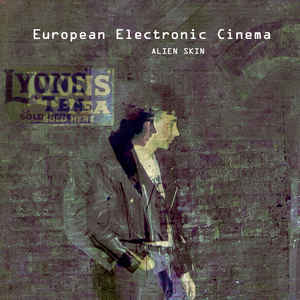 Background/Info: George Pappas will always be linked to this world-wide 80s hit “Send Me An Angel” he ever composed when he was a member of Real Life. Pappas is already active under the Alien Skin moniker for a couple of years now and has released numerous productions. The early records got released on the now defunct A Different Drum while he now mainly self-releases his work.

Content: “European Electronic Cinema” is a new exploration of electronic-pop music mixed with many other influences like jazz and lounge music. The songs are driven by slow rhythms while carried by the particular vocals of George Pappas. His timbre of voice sometimes reminds me of Marc Almond, which is the type of voice fitting with jazzy electronics.

Some of the jazzy passages have been reinforced by some synth-trumpet sounds. There’s some sensuality in this album, which reaches a climax during the female backing vocals. The work however remains pretty pop-minded and still a bit into wafting atmospheres, which sometimes become pretty cinematographic-minded.

+ + + : Alien Skin is an atypical formation, which sounds on the side line of classical electro-pop standards. The sound is more diversified and mixed with an explicit jazz influence. It’s music to relax and dream away, but also accomplished with a deep touch of melancholia. There are a few noticeable songs on this opus and I especially want to mention the love song “I Still Think Of You” and the totally sensual-like “The Emperor’s Tram Girl”.

– – – : Alien Skin is not exactly music to get wild on, but more like a free-pop style to listen to. It’s not the most accessible kind of music.