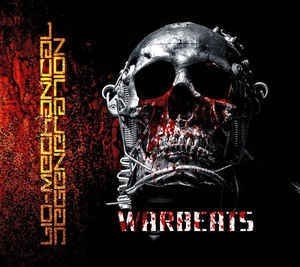 Content: “Warbeats” is clearly into sophisticated EBM. The composition is elaborated and accomplished with great sound sculptures and numerous sound effects and other crashing percussion. The songs are carried by icy synth treatments and Tommy T’s zombie-like timbre of voice.

The elaboration and global approach reminds me of a mix of Frontline Assembly (which remains an important source of inspiration in the work of Vincent Pujol) and Vomito Negro.

Both remixes are interesting as is consists of two tracks that were originally released on their debut album.

+ + + : “Warbeats” is a fully accomplished dark-body music opus revealing amazing sound treatments like deep bass lines, icy sound effects and somewhat industrial like percussions. It’s an elaborate composition, and according to me one of the best productions ever accomplished by this duo. This is not the typical EBM format, but an intelligent songwriting that reveals a passion for sound creation. There’s an efficient twist between danceable vibes and haunting atmospheres. The album reveals several brilliant songs.

– – – : It’s not always that easy to differentiate verses from choruses. The writing is dense and all the layers and structure sometimes feel a bit like melting together, but you don’t hear me complain!

Conclusion: “Warbeats” definitely belongs to this restricted number of absolute ‘best of’ EBM-albums of 2016. I hope this duo will not make us wait  a decennium to unleash a new album.

Since you’re here … … we have a small favour to ask. More people are reading Side-Line Magazine than ever but advertising revenues across the media are falling fast. And unlike many news organisations, we haven’t put up a paywall – we want to keep our journalism as open as we can. So you can see why we need to ask for your help. Side-Line’s independent journalism takes a lot of time, money and hard work to produce. But we do it because we want to push the artists we like and who are equally fighting to survive. If everyone who reads our reporting, who likes it, helps fund it, our future would be much more secure. For as little as 5 US$, you can support Side-Line Magazine – and it only takes a minute. Thank you. The donations are safely powered by Paypal.
Tags: Bio-Mechanical Degeneration, Diverje, DSBP, EBM