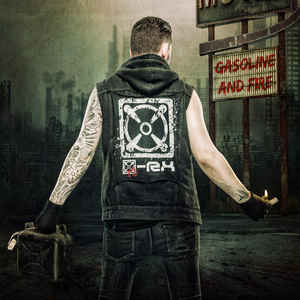 Background/Info: Set up by Pascal Beniesch (and later on joined by live member and backing vocalist) Jan Teutloff), X-RX is back on track unleashing its sixth album and the first one in three years.

Content: I’ve never been a huge ‘fan’ of X-RX, which is a project good to dance on, but being a bit too cliché and sometimes dealing with cheap, but danceable sound formulas. I can’t get away from the idea that this album is a new cliché although the song became more mature and globally speaking ‘interesting’. Most of the songs now feature harsh vocals, which are comparable to the enraged style of Combichrist. The album is mix between classical dark-electro inspiration and dark techno-body music.

+ + + : Pascal Beniesch has released his best work to date. This album is really relevant featuring great sound treatments. Even if it still sounds a bit cliché (Combichrist come out of that body!), the songs are elaborated and efficient. This album reveals multiple noticeable songs. There’s a right balance between power, danceable vibes and carrying choruses. The vocals express passion and rage, which is a perfect match with the music.

– – – : I noticed a few quieter tracks, which are a kind of intermezzo, but poorly inspired. The album sounds a bit like a copy of early Combichrist work, but at least it’s a damned good production.

Conclusion: “Gasoline And Fire” finally is the album I was desperately waiting for! The band was already popular and recognized, but I’m maybe one of the latest ones to get convinced. This work is a solid basis to move on with.

Since you’re here … … we have a small favour to ask. More people are reading Side-Line Magazine than ever but advertising revenues across the media are falling fast. And unlike many news organisations, we haven’t put up a paywall – we want to keep our journalism as open as we can. So you can see why we need to ask for your help. Side-Line’s independent journalism takes a lot of time, money and hard work to produce. But we do it because we want to push the artists we like and who are equally fighting to survive. If everyone who reads our reporting, who likes it, helps fund it, our future would be much more secure. For as little as 5 US$, you can support Side-Line Magazine – and it only takes a minute. Thank you. The donations are safely powered by Paypal.
Tags: Combichrist, X-RX