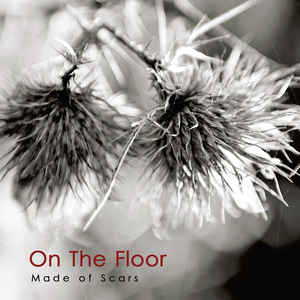 Background/Info: Hailing from Hamburg (Germany), “Made Of Scars” is the first new album of On The Floor since “Under A Heart-Shaped Sun” (2003). Their previous opus ‘has been reflecting on the wish of being individual and youthful uprising’ while the new work ‘is dealing with the results of this process. The loss of innocence and becoming more mature gave place for the composure to express feelings more directly’.

Content: This album is at the same time a new beginning, but still a consecration as a lot of other bands can only dream of getting signed to the Dark Dimensions group. “Made Of Scars” is mixing good-old elements from the new-wave decade with a personal approach getting this album quite diversified and not easy to define. From dark-rock to new-wave to wave-pop electronics, this work covers a wider sonic canvas.

The album features 11 songs plus 2 bonus tracks, which are reworked cuts which were originally released on “Under A Heart-Shaped Sun”.

+ + + : Diversity definitely is the main characteristic of this work, and also one of its main strengths. On The Floor feels comfortable composing rock-wave music, sometimes accentuated by fuzzy guitar parts and next moving into more electronic structures empowered with guitar. They’ve found a perfect cohesion between all their influences, which resulted in a few great cuts such as “You Came To Dance”, “Black Valentine” or yet the reworked versions of “Killing Queen” and “In Her Eyes”. I also like the singer’s deep timbre of voice.

– – – : “Made Of Scars” is an easy listening piece of music and I can only say that it even was a pleasant experience, but globally speaking this album is maybe missing some ‘identity’. It’s not really the kind of production I’ll keep in mind for missing this little, personal touch or what I commonly call ‘sound DNA’.

Conclusion: “Made Of Scars” sounds as a cool ‘come-back’ for On The Floor, but I guess not the kind of work that will bring them back on the map of gothic and new-wave music.

Tags: On The Floor