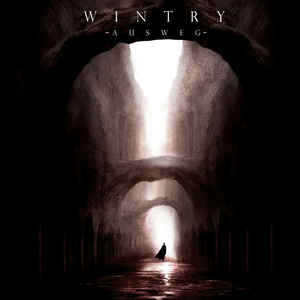 Background/Info: Wintry was originally set up in the 90s by Alex Twin (3 Cold Men, Individual Industry and owner of the Brazilian label Wave Records) and later on joined by German singer Anne Goldacker (ex-Obsyre). After having released a debut album in 2009 (cf. “Atmosphere Around Us”) the band is now working on a new album. So this 7” serves as an appetizer. Both songs have been produced by John Fryer. Notice by the way that the vinyl edition has been strictly limited to 150 copies.

Content: There’s not that much to say about a 7” featuring 2 cuts and there’s not that much difference between the title song and the B-side; both cuts featuring good-old 80s influences, which must have been inspired John Fryer who produced numerous bands from the 4AD label. This is pure 80s electro-wave and melancholia accentuated by the German lyrics of Anne Goldacker.

+ + + : The main strength of this single is the good-old vintage atmosphere, which sounds totally 80s-like. It’s the kind of band that might appeal for fans of X Mal Deutschland although it sounds ‘warmer’ in sound. The deep and dark resonating bass lines create a delicious balance with the refined electronic treatments. The production of John Fryer definitely is a very important aspect of this work.

– – – : I like both cuts, but none of them really appears to be potential hits.

Conclusion: I experienced this single as a pleasant and cool teaser for the upcoming album.

Since you’re here … … we have a small favour to ask. More people are reading Side-Line Magazine than ever but advertising revenues across the media are falling fast. And unlike many news organisations, we haven’t put up a paywall – we want to keep our journalism as open as we can. So you can see why we need to ask for your help. Side-Line’s independent journalism takes a lot of time, money and hard work to produce. But we do it because we want to push the artists we like and who are equally fighting to survive. If everyone who reads our reporting, who likes it, helps fund it, our future would be much more secure. For as little as 5 US$, you can support Side-Line Magazine – and it only takes a minute. Thank you. The donations are safely powered by Paypal.
Tags: 4AD, Wintry