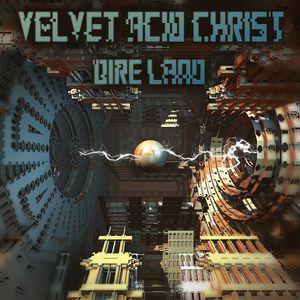 Content: The new album by Velvet Acid Christ is something different and yet still familiar. “Dire Land” is a kind of look back at the previous albums “Maldire” and “Subconscious Landscapes”.

We get an interesting palette of remixes plus a few extras like previously unreleased songs and a cover version. Both new cuts (cf. “Klaglas” and “Dystvonya”) are not exactly what I should call master hits although they reveal the familiar sophisticated electro style of mastermind Bryan Erickson.

“Dystvonya” is especially a well-crafted and intelligent composition carried by a big kick on a rather slow cadence. It sounds a bit like electro-ambient music. “Klaglas” sounds more mysterious, but still animated by the specific sound complexity of VAC. This song is more evasive and refined.

The cover version of The Dead Milkmen’s “Big Time Operator” is very special. It brings this old punk-rock song back to life in a somewhat ‘d’n’b meets punk’ way while featuring vocals by the original singer of The Dead Milkmen (Rodney Anonymous). It’s not exactly the best song on this album, but it sounds a bit like VAC has exorcised some old demons.

The other songs left are mixes/remixes by some interesting names in the scene. God Module takes off with a great and pure dark-electro minded remix of “Christ Whore”. Decoded Feedback comes up next with a cool remix of Eye H8 U”. I personally prefer the more into EBM and industrial sounding remix of “Inhale Blood” by the talented Dead Hand Project.

I also noticed a minimal-minded remix of “Bend The Sky” by Dead When I Found Her while the more into electro-pop sounding remix of “Barbed Wired Garden” by Assemblage 23 injects a touch of refinement.

Another interesting song is the ‘new’ version of “Sex Disease”, which was originally released on the 3rd full length “Neuralblastoma”. The “2014 Mix” reminds me a bit of another great American formation (cf. Mentallo & The Fixer) with an extra EBM touch on top. This is the kind of song that adds a real bonus to the album on, which you’ll find much more than the usual load of remixes.

Conclusion: “Dire Land” is not exactly a totally ‘new’ album, but it features some little surprises, which will make the fans of the band really happy.