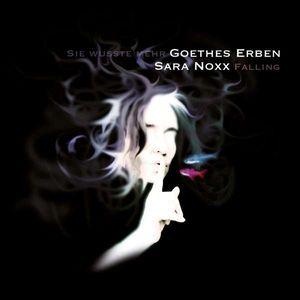 Content: This new EP by Sara Noxx is her second collaboration with German gothic legend Goethes Erben. Oswald Henke and co stopped their band a few years ago, but Sara Noxx invited him again for a new collaboration.

“Sie Wusste Mehr” sounds like pure Goethes Erben and that’s not really a coincidence as it concerns a previously unreleased song of the band. It sounds like gothic with grace and filled with reverie. Oswald Henke sings in his familiar and somewhat theatric way. The song reveals the familiar piano arrangements adding a touch of sadness, but the song is a real beautiful composition with a great apotheosis.

There also is an instrumental version on, which the dreamy and melancholic part becomes more explicit. The “Duett Version” features Sara Noxx doing backing vocals in her usual, whispering and sensual way.

“Falling” is a song originally released on the new full length “Entre Quatre Yeuxx” of Sara Noxx. It’s a beautiful song filled with electronic reverie and delicate piano arrangements. Sara Noxx’ particular timbre of voice embellished this song with a sweet and sensual vibe. This song was sung in English and features extra female backing vocals.

We here get different versions/mixes as well. There also is an instrumental version, but the most noticeable mix is the “Duett Version” featuring Oswald Henke. This song is mixing beauty and sadness, English and German languages, but mainly an accomplished and somewhat sacred union between two great artists. The other versions left bring some extra diversity and a different focus but can’t really compete with the “Duett Version”.

Conclusion: Sara Noxx already realized multiple noticeable collaborations, but the one with Goethes Erben has something more intimate and graceful. This is a magnificent artistic exposure between two talented artists of the German scene.