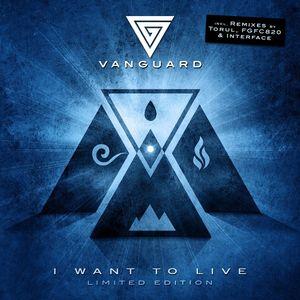 Content: The Swedish Vanguard duo is a band I’ve kept an eye on since their earlier work. They next got signed to Conzoom Records, which was the right label for their electro-pop inspired music. It all resulted in a few EP’s and 2 full length albums. The band has now joined the more famous Infacted Recordings to give a new ramp-up to their career.

“I Want To Live” is the first official EP released by their new label and it’s a perfect opportunity to rediscover the mature production of this band. The title song is a rather typical Vanguard song featuring this extra little moody touch, which during their early years often reminded me of Mesh. The song is a well-crafted mix between danceable vibes and elaborated electro-pop music.

We next get 2 other new songs, which are much more than simple B-side cuts. Vanguard now reveals a more explicit EBM inspiration, which has been mixed with the pop basis. The EBM aspect is mainly hidden in the solid bass lines and especially “Rising Phoenix” is a cool song in the genre. They’ve found a perfect balance between both influences, which also comes through at “Alive Inside”.

The least I can say is that the ‘new’ Vanguard stands for a cohesive and power-pop like composition with alluring vocals on top.
This EP also brings its usual number of remixes. All I can say is that the choice of the bands is absolutely essential and Vanguard picked the right ones. The title song has been remixed by 4 artists, but the one you really have to keep in mind is the so-called “KC Killjoy Vs ExoSun Starsign Mix”. This remix is pure power and will make you dance for more than 8 minutes. There’s a great mixture of sounds and effects on this version.

I also have to mention a devastating and pumping remix by Interface and another one by FGFC820. Torul is the only band to bring a sweeter touch to the EP and some diversity in the remixes.

Conclusion: “I Want To Live” is a cool new song, which has also been very inspiring for most of the remixers. Both other new songs are pretty cool as well so I’m really looking forward to welcome the new album of this band.

Since you’re here … … we have a small favour to ask. More people are reading Side-Line Magazine than ever but advertising revenues across the media are falling fast. And unlike many news organisations, we haven’t put up a paywall – we want to keep our journalism as open as we can. So you can see why we need to ask for your help. Side-Line’s independent journalism takes a lot of time, money and hard work to produce. But we do it because we want to push the artists we like and who are equally fighting to survive. If everyone who reads our reporting, who likes it, helps fund it, our future would be much more secure. For as little as 5 US$, you can support Side-Line Magazine – and it only takes a minute. Thank you. The donations are safely powered by Paypal.
Tags: Vanguard