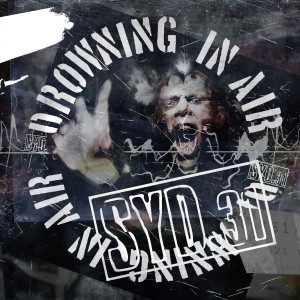 Content: Operating from Manchester (UK) Syd.31 unleashed its 2nd EP to the world. The least I can say is that this formation set up by Dr Magic can be simply one of the hottest new sensations in electro land.

“Drowning In Air” features 4 new songs plus a surprising cover version. One of the main sources of inspiration clearly appears to be The Prodigy. Syd.31 experiments with breakbeats injecting a great dynamic and power into the songs, but also some of the sound treatments remind me of the raw and techno-industrial style of The Prodigy. Some other technoid elements remind me to Ultraviolence, which is a somewhat forgotten British master of electronic underground. All those elements have been mixed with a hard industrial-rave style creating a merciless and exciting sound.

It’s not really a surprise that Noisuf-X did the mastering of this EP while contributing to the most surprising song of the EP. The cover version of “Mr. Vain” (originally performed by Culture Beat) is not exactly the kind of song you expect to be covered by a dark-electro formation. It’s fun, it’s totally weird, but ultra danceable and you clearly ill recognize the hard and dry, stumping kick of Noisuf-X.

But this is of course not the main song of this EP. The songs “Disorder” and “Hate” are more appropriated to get an idea about this formation. It all reassembles the aforementioned influences resulting in a dangerous sonic bomb. “Hate” appears to be a potential hit, perfectly illustrating the modern technological approach of this band.

But there’s more to enjoy and I here refer to the song “No Fear”, which is driven by d’n’b inspired rhythms while the sound treatments remain pretty raw and technoid-minded. The song “Revolution” is the one that reminds me a bit to the sometimes hard-core driven Ultraviolence.

Notice by the way that multiple guest artists have been invited to accomplish this EP. I already mentioned Jan L (Noisuf-X), but you’ll also discover names like Kommand + Kontrol and Paresis & Beinaheleidenschaftsgegenstand while Grendel’s J.D. Tucker produced 4 from the 5 songs (“Mr. Vain” being produced by Jan L).

A last element consists of the vocals, which mix numerous samplings and a rather harsh way of singing.

Conclusion: AnalogueTrash Records already have a few cool bands like Machinista, Atomzero, Advance, Neonsol ao, but Syd.31 could rapidly become their biggest sensation. This is a real astonishing release.

Since you’re here … … we have a small favour to ask. More people are reading Side-Line Magazine than ever but advertising revenues across the media are falling fast. And unlike many news organisations, we haven’t put up a paywall – we want to keep our journalism as open as we can. So you can see why we need to ask for your help. Side-Line’s independent journalism takes a lot of time, money and hard work to produce. But we do it because we want to push the artists we like and who are equally fighting to survive. If everyone who reads our reporting, who likes it, helps fund it, our future would be much more secure. For as little as 5 US$, you can support Side-Line Magazine – and it only takes a minute. Thank you. The donations are safely powered by Paypal.
Tags: Syd.31