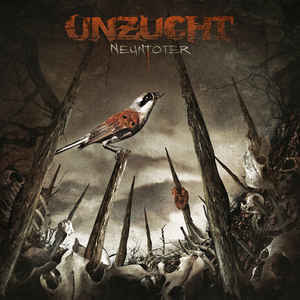 Background/Info: After having released 3 albums on NoCut Unzucht signed to Out Of Line, probably becoming the ‘hardest’ band of this label. AlexBlaschke, DanielDeClercq, DanielSchulz and TobyFuhrmann have launched their new opus, which can be translated into English as “red-backed shrike”. The idea behind this title is about ‘a harmless-looking bird of extraordinary beauty, it reveals itself as a merciless killer which impales its victims on thorns before devouring them.’ The limited edition of the album features the main album with 11 songs and a bonus disc with 6 extra cuts.

Content: Unzucht’s sound is dominated by very heavy guitar playing and mainly driven by a satanic cadence. They call it ‘dark-rock’, but it rapidly appears to be a violent sonic expression by metal riffs and even pure hard-core passages. A few and somewhat dreamy intermezzos will give you a few minutes to recover from this inferno, but Unzucht sounds like a machine that never stops and always moves forward.

The choruses are mostly characterized by melodious and carrying passages. It makes the album more accessible and refreshing. You now and then will notice some electronic arrangements, but that’s just a way to achieve the work, which is always getting back into sonic power. All the vocal parts have been sung in German by front man Daniel Schulz.

The bonus CD reveals a few more new songs plus 2 cuts originally featured on the main disc, but now sung by guest singers. The most noticeable artist is Chris Harms (Lord Of The Lost). There also is one remix by Andrew Boman.

+ + + : If you’re into power, Unzucht will give you full satisfaction. This album is a real sonic explosion, but which remains controlled by very accessible choruses and melody lines. The opening cuts will leave you breathless and especially “Lava” reaches a total climax.

– – – : The bonus disc doesn’t really add to the work. It might have been a better idea adding remixes by other formations and eventually some label mates.

Conclusion: Unzucht makes no compromises and sounds like a merciless assault on any eardrum.