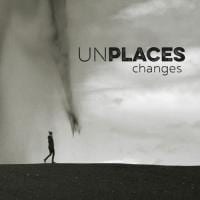 Background/Info: German Unplaces trio strikes back with a new album, which seems to be their second one.

Content: “Changes” is a fascinating and diversified piece of work consisting of well-crafted songs composed with electronics and guitar. The songs are switching from reverie to more powerful passages. I know and then noticed passages reminding me of Placebo. There also accomplished a honest cover version of Talk Talk’s legendary “Such A Shame”. The timbre of voice of front woman Dorette Gonschorek also has something pretty fascinating; being sometimes a bit androgenic.

+ + + : The songs have been composed with a perfect harmony between electronics and guitar, but globally speaking the production is also fully accomplished. There’s a real maturity emerging from this work, which resulted in several noticeable cuts. The cover version of “Such A Shame” can’t compete with the original version, but it’s however a cool cover version. I also have to say I was impressed by the vocals. There’s a sensuality and at the same time some fragility emerging from Dorette’s singing. Last, but not least this CD version reveals a great artwork. It’s a digipak format featuring 2 booklets where each single song has been illustrated by a picture.

– – – : No doubt about it, the songs reflect a real maturity and great writing skills, but the only –and essential element, I would have seen more accentuated, is more elevating and hitting choruses.

Conclusion: “Changes” is a cool and beautiful work, but missing a real highlight.

Best songs: “Freedom”, “Changes”, “Lost In Space”, “Against Ourselves”.