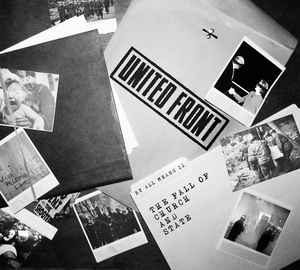 Background/Info: United Front is a duo consisting of Gordon Lazarus (previously active under the U-731 moniker) and Anthony S. Kuchta III. They see themselves as an ‘anti-political organization’. After a few digital tracks and a split album together with Camisole they now joined hands with Tumor (Malignant Records) and Oppressive Resistance Recordings to unleash this debut full length.

Content: United Front is mixing different influences, which move from industrial to a tormenting ambient format to pure experimentalism. They injected numerous spoken samplings in their work, which create a hostile and nasty atmosphere. Screams of terror are accentuating the hostility hanging over this album while church bells feel a bit like announcing an extra disaster.

+ + + : United Front reminds me of some ‘engaged’ industrial pioneers. The samplings are quite explicit and rapidly appear to be a reaction against our contemporary politicians and all kind of conflicts in our world. I like this atmosphere, but I also enjoyed the sound revealing monstrous sound blasts, resonating noises and bombastic drums. All influences have been perfectly assimilated resulting in a few outstanding cuts, but especially both final tracks are worth to listen.

– – – : “By All Means II” is a cool work so there are no real minus points. A few passages in the beginning part are maybe less convincing compared to the great apotheosis.

Best songs: “Our War Alone”, “No Friends No Enemies”, “Church And State”.

Since you’re here … … we have a small favour to ask. More people are reading Side-Line Magazine than ever but advertising revenues across the media are falling fast. And unlike many news organisations, we haven’t put up a paywall – we want to keep our journalism as open as we can. So you can see why we need to ask for your help. Side-Line’s independent journalism takes a lot of time, money and hard work to produce. But we do it because we want to push the artists we like and who are equally fighting to survive. If everyone who reads our reporting, who likes it, helps fund it, our future would be much more secure. For as little as 5 US$, you can support Side-Line Magazine – and it only takes a minute. Thank you. The donations are safely powered by Paypal.
Tags: terror, United Front