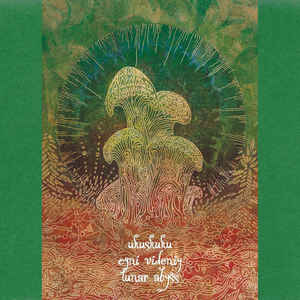 Background/Info: This untitled album is a split release between 3 dark-ambient & experimental formations from the magic Russian city St. Petersburg. All projects have been featured with one single track while the last cut is a live track featuring a collective performance of the 3 artists. Notice by the way all artists already released some work on Zhelezobeton before.

Content: The common element between all the projects is the dark-ambient and soundscape-like approach of their composition. From heavy, overwhelming, dark sound waves to field recordings (and/or samplings) to boiling sounds announcing an imaginary disaster to voices lost in a soup of noises, this work is a sonic puzzle, which now sounds pretty abstract and than pure ambient-like. The live cut is a fully accomplished piece of ambient, which has been progressively built up and revealing a mystic touch.

+ + + : The visual aspect of the work is an essential part of ambient music. This split release is quite diversified in its sonic approach, but there clearly is coherence between all artists, which comes perfectly through at the final cut. This track is a well-crafted piece moving quite progressively towards a climax. It will hold you in its grip for more than 30 minutes.

– – – : Some of the abstract passages aren’t my favorite ones. This is the kind of record, which needs a visual element and that’s a bit missing when you only get the music.

Conclusion: This split-album appears to be a truly sonic puzzle and at the same time mayhem of sound experimentalism and field recordings joined by obscure atmospheres.

Since you’re here … … we have a small favour to ask. More people are reading Side-Line Magazine than ever but advertising revenues across the media are falling fast. And unlike many news organisations, we haven’t put up a paywall – we want to keep our journalism as open as we can. So you can see why we need to ask for your help. Side-Line’s independent journalism takes a lot of time, money and hard work to produce. But we do it because we want to push the artists we like and who are equally fighting to survive. If everyone who reads our reporting, who likes it, helps fund it, our future would be much more secure. For as little as 5 US$, you can support Side-Line Magazine – and it only takes a minute. Thank you. The donations are safely powered by Paypal.
Tags: Mayhem, Uhushuhu / Ogni Videniy / Lunar Abyss