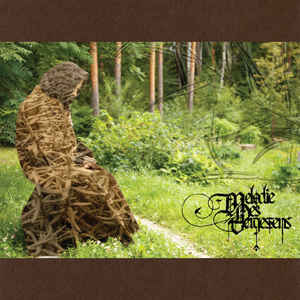 Background/Info: Russian artist Igor Tumanniy started making music in 2012. His music is based on ‘post-processing of live sound of the accordion’. He already released considerable number of productions on different labels. This opus got first digitally released in 2016 on Eternal Return Records and got a CDR-issue in 2017 on Zhelezobeton.

Content: You clearly can hear the sound of the accordion, which remains a very unique sound often linked to folk music and chanson. Melodie Des Vergessens use it an experimental way achieving the compositions with electronic treatments and field recordings. It all together creates a haunting universe reflecting tortured minds and a feeling of isolation.

+ + + : “Palustre Genesis” makes me think to a ‘horror’ soundscape. The tracks have been progressively built up with an impressive sound canvas. The visual character of the work accentuates the impact of the music, creating feelings of angst and simply horror. You get the impression of being lost in endless sonic corridors, sometimes joined by a few drones. The sphere is icy and tormented, which both are essential keywords for any great dark-ambient production.

– – – : You don’t hear me complaining, but it remains an extreme sound sensation accentuated by experimentalism. That makes the work not that accessible for a wider audience, but I’m afraid it’s not really the purpose of this kind of recording.

Conclusion: I experienced this album as a sophisticated artistic exposure from a creative musician. This is the kind of album deserving a wider recognition from the dark-ambient scene.