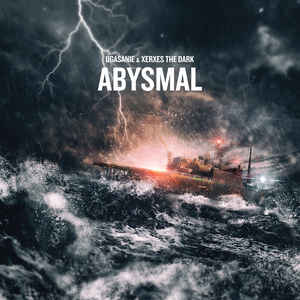 Content: The result of this sonic exploration and creation is a 6-tracks album on, which you clearly can recognize numerous aquatic sounds and noises. This album has been accomplished as a fusion between field recordings and sonic treatments. A few spoken passages are emerging now and then. The listener feels embarked on a frightening trip throughout an imaginary aquatic world where the water has been replaced by icy sounds. And you sometimes will get scared when a cold electronic signal suddenly appears at the surface of this dark abyss.

+ + + : The tracks have been accomplished with a slow progression, reaching their climax of horror right at the final part of the work. “Creatures Of The Depths” and “The Sailor’s Song” both are overwhelming pieces of dark-ambient music. There’s a strong visual aspect emerging from this opus, which creates a film that will be different for each listener. This is a fully accomplished work between two artists, who I can only encourage to renew this experience around another theme.

– – – : I can’t really say that the opening cuts are not convincing, but maybe a bit long-during till you finally join more exciting and accomplished tracks at the second half of the record.

Conclusion: If Jules Verne would have been alive he would maybe have used this opus to bring his “Twenty Thousand Leagues Under The Sea” on music…

Best songs: “Creatures Of The Depths”, “The Sailor’s Song”, “Bathyscaphe”.

Since you’re here … … we have a small favour to ask. More people are reading Side-Line Magazine than ever but advertising revenues across the media are falling fast. And unlike many news organisations, we haven’t put up a paywall – we want to keep our journalism as open as we can. So you can see why we need to ask for your help. Side-Line’s independent journalism takes a lot of time, money and hard work to produce. But we do it because we want to push the artists we like and who are equally fighting to survive. If everyone who reads our reporting, who likes it, helps fund it, our future would be much more secure. For as little as 5 US$, you can support Side-Line Magazine – and it only takes a minute. Thank you. The donations are safely powered by Paypal.
Tags: Ugasanie, Ugasanie & Xerxes The Dark