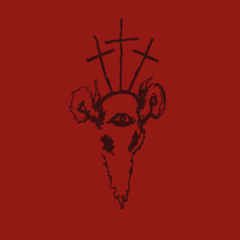 Background/Info: Tvlpa consists of an anonymous group of ‘Draconian sorcerers’-musicians from Gothenburg (Sweden). They’ve already released a few productions on Belzebez. One of these albums “Mountain Of The Opposer” was released in 2015 as a digital release. The album has been now re-released by Tumor on CD format featuring the 9 original songs.

Tvlpa is an intriguing combo, which claims to be in search of ‘the exploration of the mystical properties of sound and time is the primary matrix across which we allow our art to unfold like a multidimensional, audial sigilisation.’

Content: This work is nothing less than a real spooky experience in sound, which takes off with a kind of pitched vocals creating a scary, ghost-like sensation. The work is carried by some slow percussion parts and dark, electronic treatments. It rapidly creates a tortured ambiance, which is reinforced by buzzing, low sounds and a few drones.

The low electronic sequences are pretty repetitive, this way creating a kind of ritual impression. A few cuts are still into some experimentation. I’m referring to a kind of rotor sound and different kind of noises, which are emerging from nowhere. I also noticed a few vibrating sound waves and a totally surprising EBM sequences right at the beginning of a song.

Notice by the way that the artwork has been done by T. Ekelund of Trepaneringsritualen.

+ + + : I like the anonymous aspect of the band, which is an intriguing element. Who’s really hiding behind Tvlpa? I like the spooky accomplishment of this work and the diversity of the sound sources. The few vocal treatments reinforce the obscure and ritual touch of this album.

– – – : The album is globally entertaining and fascinates from start till the end, but I didn’t hear a real apotheosis. The tracks are cool, but I’m missing a climax and the sensation of ‘cold sweat’.

Conclusion: “Mountain Of The Opposer” is an album, which clearly deserves this CD-format. It’s a frightening opus somewhere in between dark-ambient and ritual music. It has been touched by the hand of merciful evil force and could have been more disturbing.