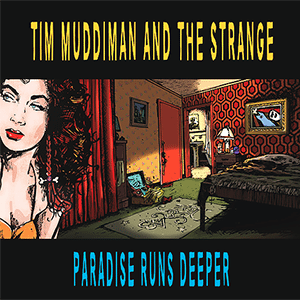 Background/Info: Tim Muddiman is known as the guitarist/bass-player of Gary Numan and is also producer/guitarist for the English alternative rock band Pop Will Eat Itself.

Tim is a person who works according the DIY tradition. He is totally involved in the whole process of the creation of his music and his videos (songwriting, playing instruments, producing, directing, editing, designing, …) as well as updating his website and social media.

The cd contains 13 songs including the 4 previously released singles “Your Drugs/Hands And Claws”, “Rolling Stones”, “Glass Queen” and “Wildwood Stone”. The last track “Wildwood Blue Stone” is an alternative version of “Wildwood Stone”.

The songs are about survival and healing. Dark modern grooves and modern production have brought this album to have it’s own unique sound and character.

All songs are emotionally loaded and contain outstanding guitar-riffs and clearly understandable voices.

+ + +: Respect for Tim Muddiman who could release this well produced album via a crowdfunding campaign on PledgeMusic (including exclusively released limited stuff).

– – -: Not all songs are dancefloor orientated or uptempo, some of them are more to listen to and to let yourself be taken away into the created atmospheres.

Conclusion: A very nice album for music lovers who are not narrow-minded and are interested in a wider range of alternative music!