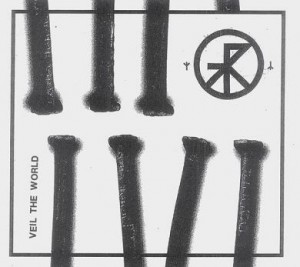 Content: Thomas Martin Ekelund better known under the Trepaneringsritualen moniker always has been a unique experience in Industrial Music. This Swedish project explores the most tormenting and horror-like corners of industrial music while moving on the edge of ritual-ambient.

“Veil The World” was originally released in 2011 as a very limited cassette-format of 40 copies. So I can imagine even the biggest fans of the band didn’t find an original copy of this little treasure.

Enough reasons to re-release this somewhat forgotten release on CD format. It also is the 2nd release of this band by Cold Spring Records while other productions were released on different labels like Malignant Records, Aufnahme + Wiedergabe ao.

The album features 9 songs and directly inviting us to join a haunting sound universe animated by spooky, narrating vocals and industrial components like icy, metallic sounds and crashing passages. Some aspects of the work remind me to the early industrial pioneers, but there also is a more contemporary element revealing impressive noise manipulations. “Lightbringer” and “Drunk With Blood” both move into a heavy sonic storm of repetitive loops.

In my opinion, one of the absolute highlights is “Nekyia”, which shows the darkest and most obscure side of this band. I also was captivated by “Akeldama”, which features compressed, distorted screams, and reveals a somewhat trance-ritual industrial sound. The ritual element becomes more explicit on “Invocation” while “C’Est Un Reve” rather sounds as a nightmarish experience to bring this album to a real disturbing passage. This cut is carried by an aggressive electro-industrial sequence while Ekelund is once more screaming as if possessed.

Conclusion: I have had an endless fascination for the obscure sound realms of Trepaneringsritualen and the re-release of this earlier work appears to be a nice gift for all lovers of extreme sonic ambiances.