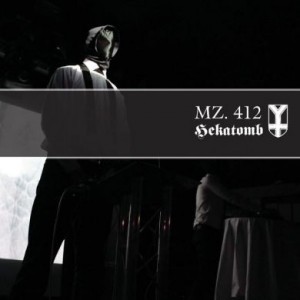 Content: The fans of MZ. 412 are waiting for a new album from the inventors of ‘true black industrial’ for years. One of the numerous projects set up by genius Henrik Nordvargr Björkk (aka Kremator) started in the late 80s, but not much studio work has been released since the new millennium.

“Hekatomb” is a live album that was recorded during the performance at Cold Spring’s anniversary event in London (2011). The line-up for this special event consisted of Nordvargr, Drakh, Ulvtharm and Werdenskog. This album features 14 tracks, simply entitled “Act” and numbered from 1 to 14. “Hekatomb” revisits tracks of the band that were created over the years.

The work is a constant mix of styles, which can be summarized as ‘true black industrial’. Elements of noise, industrial- and ambient music have been mixed into an extremely dark trip. “Hekatomb” is a poignant creation filled with bombast and drama boiled down into a heavy sound production, and with a passion for sound creation and manipulation. Monstrous sound treatments and icy blasts come out the speakers. A state of terror is reached by the addition of drones and frightening sound waves. It now and then moves into a kind of imaginary ritual ambiance.

“Hekatomb” remains dark from start till end, but is pretty diversified. The mix of influences is absolutely fascinating as it leads to a creative outburst. But you rapidly feel like you are standing in front of the gates of heaven. This visual appeal is accentuated by some screaming vocals, but other whispering passages are pretty freaky as well.

You don’t really feel like you are listening to a live recording. The quality of mixing and recording both are absolutely phenomenal. If I’d to imagine one negative point it maybe would be that this kind of performance (and band) would have deserved to be released on DVD.

Conclusion: If you like noise, industrial-, dark-ambient- and ritual music, just buy “Hekatomb”, which is the perfect symbiosis between all aforementioned styles. A class-act!