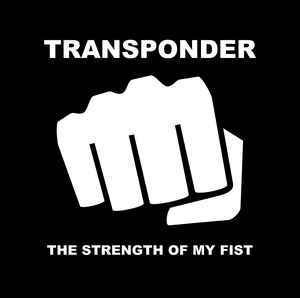 Background/Info: Transponder is a brand-new German EBM project set up by Freund 424 (Rhesus Factor) and singer HanZ AciD (Werksfront). The idea of Transponder happened after Claus Larsen did some guest vocals on the last Rhesus Factor album. A new project was born rapidly joined by HanZ AciD on vocals. This is the debut work, which is available as a strictly limited CD release of 242 copies.

Content: If you’re already familiar with Rhesus Factor you for sure will get an idea about the potential sources of inspiration running through. There are some differences as well, Transponder being less polished and more minimal and straight forward. All requested EBM ingredients have been assembled and I here have to mention the terrific bass lines and typical 4×4 structures joined by enraged vocals and a constant, danceable cadence.

Transponder might evoke bands like Front 242, Nitzer Ebb, Orange Sector and Ad:Key, but with this extra touch of minimalism. One of the best cuts is featuring Claus Larsen on vocals who –just like on Rhesus Factor, has the perfect timbre of voice and rage to sing on this typically Body-minded production. “The Strength Of My Fist” is a rather repetitive and predictable work moving from real hard cuts to a few softer pieces, but always driven by the same passion for retro-EBM.

– – – : A few songs remained unaccomplished and are more like in a demo format. I don’t know if it was been made it a hurry, but that’s the feeling some songs are giving me.

Conclusion: Transponder guarantees 100% EBM energy! It’s a kind of back to the roots revealing a hard, but unpolished and less sophisticated sound. It’s all made of power so the title perfectly symbolizes the image of an uppercut right in your face.