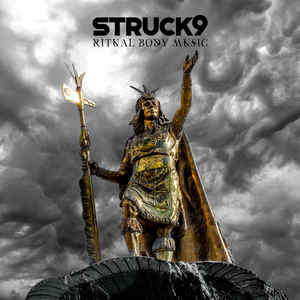 Background/Info: Struck9 is a Colombian EBM project set up in 2008. After a debut album (cf. “Democracy”) released in their homeland on Black Leather Records (2010) the band is now back on track with a new opus. They joined hands with EK Product to unleash their “Ritual Body Music”.

Both last songs are remixes by Autodafeh and Atropine.

+ + + : This is retro-EBM, but with a personal style and attitude. The songs might appear ‘classical’, but they’re well-crafted and accomplished with little details like cool bleeps, metal percussion sounds at the right place and simple, but efficient tunes. The album features a succession of great songs and honestly there’s no song to throw away. Struck9 doesn’t reinvent EBM, but will please all lovers of the genre by this outstanding work.

– – – : The unpolished sound production is pretty vintage-like, but it took me a few minutes to get used to it. I think a more contemporary (and professional) production would give an extra to the album although the spirit would maybe be different. It’s a bit the same for the production of the vocals. So in the end it’s pure old-styled EBM in influences and production. The remixes of Autodafeh and Atropine are cool, but I personally prefer the original versions.

Conclusion: Struck9 doesn’t innovate, but this album is absolutely phenomenal. I even dare to say one of the best EBM releases I’ve heard in months!