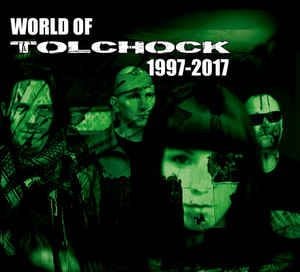 Background/Info: Tolchock once started in the late 80s as Tolchock 14. They rapidly became one of the early Swedish recognized EBM bands. Together with Cat Rapes Dog, Scapa Flow, Inside Treatment, Pouppée Fabrikk they belong to the Swedish history of EBM. After a break the band got back to business under the Tolchock moniker. The second period of the band has been featured on this album, which can be seen as a ‘best of’.

Content: Tolchock developed a different sound than Tolchock 14. It all became more crossover like, revealing a furious mix between electronics and guitar. The music is still driven by EBM elements, but some songs also moves into aggreppo reminding me Dance Or Die while heavier cuts are even touching ground with metal. The cover version of “I Kissed A Girl” originally performed by Katy Perry sounds a bit Marilyn Manson-like.

A few songs have been remixed and this is an opportunity to discover already new elements. “Kiss Of Death” is carried by technoid grooves. The song “Power Money Salvation” is one of the cuts reminding me the early years of Tolchock 14. So in the end I would say there’s enough diversity featured at this work.

+ + + : This album is a fine selection from songs originally featured at the albums “In The Name Of Tolchock”, “Wipe Out – Burn Down – Annihilate”, “Elements Of Rage” and the EP “Rewind” featuring only cover versions. It’s an opportunity to discover a great band, which has never reached the success and recognition from the Tolchock 14 years and that’s something I can’t understand. It’s maybe because the sound is harder to define, revealing different influences. I’ve been deeply impressed by the power of their work and especially the album “Elements Of Rage” remains a great piece of music. Tolchock has created a perfect fusion between all their influences, which they transposed into a powerful production driven by charismatic vocals and cool female backing vocals. This is a great compilation featuring numerous brilliant songs.

– – – : Tolchock has written several cool songs and noticeable albums, but they maybe haven’t composed ‘the absolute hit’. I think they don’t care and simply compose what they like.

Conclusion: If you never have heard of Tolchock this album will be for sure the right opportunity to discover a talented and efficient band, which definitely deserves more recognition. This is modern crossover.