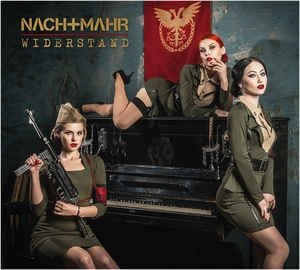 Background/Info: Thomas Rainer aka the ‘tanzdiktator’ operating behind the Nachtmahr desk became one of the most praised dark-electro artists from the last years. His success is not only due to great albums, but also for the explicit military image and propaganda style of the project. Nachtmahr strikes back again with a new EP.

Content: This EP sounds in the purest Nachtmahr strategy. First there’s the artwork and imagery and next there’s the music. The sound hasn’t changed at all –even if Thomas Rainer takes his troops by surprise ending the release with a kind of goth/folk piece.

But the other songs left “Firmament” and “Ungezähmtes Land” are easily recognizable. The songs are powerful and somewhat bombast while alternated by melodic, carrying choruses featuring enraged vocals. I sometimes get the impression listening to industrial-pop and that’s maybe what makes the difference with the average dark-electro formations.

Each song features a Russian version featuring Maria Mar from Omnimar as a guest singer –while she also is one of the models featured in the booklet and artwork. Remixes have been accomplished by ES23, Shaârghot, Affentanz and Greg Oroth while Ordo Rosarius Aquilibrio did a personal cover version of  “Ungezähmtes Land”.

+ + + : This is the kind of EP that will definitely satisfy the fans and followers of Nachtmahr. All familiar ingredients have been featured, but especially the solid choruses are the most noticeable aspect. Thomas Rainer is a talented melody writer and he each time again find the right keys to please his fans. Among the remixes I especially like the Shaârghot  and Affentnz edits. But the best song is the adaptation of “Ungezähmtes Land” by Ordo Rosarius Equilibrio. The lyrics have been sung in English and the song has this typical dark neo-folk/goth and industrial-like touch. The global artwork remains once more controversial, but definitely great!

– – – : I’m still convinced that Nachtmahr is repeating itself for years now. I’m missing some innovation; a few new ideas in the music, which could reinvent the Nachtmahr sound. It starts to become a little less too predictable.

Conclusion: The fans will be pleased by this new EP, but I think that Nachtmahr has to consider new sonic strategies to moving on conquering the music lovers.

Since you’re here … … we have a small favour to ask. More people are reading Side-Line Magazine than ever but advertising revenues across the media are falling fast. And unlike many news organisations, we haven’t put up a paywall – we want to keep our journalism as open as we can. So you can see why we need to ask for your help. Side-Line’s independent journalism takes a lot of time, money and hard work to produce. But we do it because we want to push the artists we like and who are equally fighting to survive. If everyone who reads our reporting, who likes it, helps fund it, our future would be much more secure. For as little as 5 US$, you can support Side-Line Magazine – and it only takes a minute. Thank you. The donations are safely powered by Paypal.
Tags: ES23, Nachtmahr, Omnimar, Propaganda