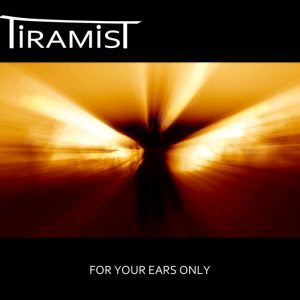 Background/Info: Tiramist is a new band consisting of experienced musicians. This band is the meeting between French formations Hide & Seek (known from their work released on Cynfeirdd) and Opera Multi Steel. “For Your Ears Only” is the meeting between 2 female- and 2 male artists sharing a passion for surreal lyrics and evasive music.

Content: The work of Tiramist is first of all characterized by beautiful and heavenly vocals. The artistic female vocal parts have this power to get you in an imaginary world carried by space-like atmospheres and accomplished with a neo-classic touch. But there also is a complement between female- and male vocals, sometimes joined by a kind of ethereal-pop sound.

You also will recognize 80s inspiration running through the work. And here again it all remains pretty styled and evasive, somewhat reminding me of Thomas Dolby.

+ + + : I’m not that surprised it took a few years for Tiramist to achieve this debut album and I sincerely hope it will be not the last one. It not only is a fusion between two talented bands, but simply a symbiosis between the members, which is an aspect that comes through in the sound and the vocals. I like the ethereal-pop style which has been mixed with delicate 80s influences and accomplished with intimate, neo-classic arrangements.

– – – : I can’t say there’s a single song to throw away, however I’m maybe missing just one potential hit.

Conclusion: “For Your Ears Only” is a subtle invitation to discover a beautiful album that will delicately caress your soul.

Best songs: “Sunshine In A Tea Tree”, “Too Late, My Dear”, “”Dancing Among The Sharks”.

Since you’re here … … we have a small favour to ask. More people are reading Side-Line Magazine than ever but advertising revenues across the media are falling fast. And unlike many news organisations, we haven’t put up a paywall – we want to keep our journalism as open as we can. So you can see why we need to ask for your help. Side-Line’s independent journalism takes a lot of time, money and hard work to produce. But we do it because we want to push the artists we like and who are equally fighting to survive. If everyone who reads our reporting, who likes it, helps fund it, our future would be much more secure. For as little as 5 US$, you can support Side-Line Magazine – and it only takes a minute. Thank you. The donations are safely powered by Paypal.
Tags: Tiramist