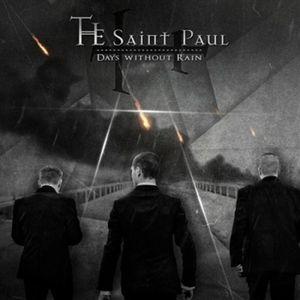 Background/Info: Two years after their debut album “Consequence” (2013) released by Danse Macabre, the German project The Saint Paul signed to Infacted unleashing their new work during the last part of 2015.

Content: Globally speaking The Saint Paul remains faithful to their original inspiration, which covers EBM and electro-pop. The main difference and real evolution with the earlier work lays in the global production, which also makes the difference with traditional body-pop standards.

The work is mainly characterized by the use of rough and somewhat industrial sounds, which have been polished into a melodic format. It injects a naughty sound, which I totally like for its originality. Some of the songs make me think of a kind of industrial-pop music. I already enjoyed their debut album, but “Days Without Rain” is without any hesitation a real accomplishment for this band.

Another important element of the production consists of the vocals. The singer adapted his way of singing and his passion from song to song.

+ + + : The somewhat industrial-pop format is absolutely remarkable and creates some distance from the typical synth-pop standards. The evolution and growing maturity of this band is a noticeable element on this work.

– – – : A few songs rather appear to be album fillers and that’s a pity as this work features several noticeable tracks.

Conclusion: “Days Without Rain” sounds like a weird title, but it mainly stands for a kind of naughty-pop production. This work reveals a somewhat unexplored side of electro-pop music.