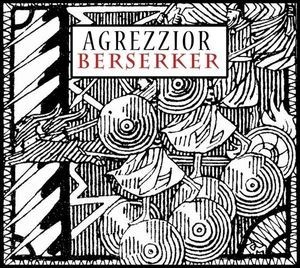 Background/Info: Five years after their successful and totally old-styled EBM debut album “Domination” we finally get new work from Agrezzior. This Swedish side-project of Autodafeh –including Mika Rossi, features a new singer. Johan Damm (Dupont, Menticide) is no longer singing on “Berserker” and got replaced by Autodafeh vocalist Jesper Nilsson.

Content: The sound and influences of the new work hasn’t really changed compared to their astonishing debut work. I think we might trust the genius of body-master Mika Rossi to create alluring and merciless EBM. A band like Front 242 is to Autodafeh what bands like Nitzer Ebb, Pouppée Fabrikk and Orange Sector are to Agrezzior.

The solid and low, vibrating bass lines are clearly inspired by a band like Pouppée Fabrikk while some of the arrangements and powerful choruses evoke early Orange Sector. Jesper’s way of singing will probably evoke Douglas McCarthy. “Berserker” doesn’t innovate at all, but simply reveals to be an impressive emulation of old-school EBM.

“Berserker” sounds hard, but pretty short. We get a total of 12 songs, each having a duration of around 3 minutes. This is EBM in the purest tradition of the genre, which means merciless and straight forward.

+ + + : Despite of their lack of originality, “Berserker” clearly appears to be a dangerous sonic weapon. The songs are fully accomplished, powerful and simply efficient.

– – – : The main strength of the work probably also is its main weakness. The work is based upon a repetitive and simple formula, but that’s precisely the essence of all good EBM, don’t you think?!

Conclusion: “Berserker” will take no prisoners, but is a total guarantee for many dancefloor victims. This is EBM with a double dose of testosterone!