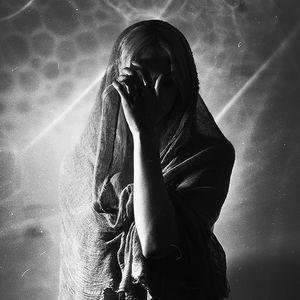 Content: I last year discovered The Devil & The Universe with their 2nd full length “Haunted Summer”, which was close to a real masterpiece revealing an interesting merge of influences. The new work of this band set up by Ashley Dayour (Whispers In The Shadow), David Pfister and Stefan Elsbacher has been released by Rustblade.

It still not easy to catch the sound of this trio, which defines it as ‘goat-wave’. This is related to their main sources of inspiration, which are mainly guided by Christian mysticism and especially the mysteries surrounding the Virgin Mary. The band visited some famous European pilgrimage sites to find their inspiration there where Catholics probably found the deeper sources of their belief. It can only, but lead to ritual-like transformation in sound.

The work is embellished by dense, mystical atmospheres leading the listener into an imaginary rite. We quickly are surrounded by haunting atmospheres and ghost-like vocals. The cult of this band clearly sounds like devoted to evil forces and pagan mysteries.

The songs have been accomplished by orchestral and epic arrangements. A few industrial aspects like percussion can be noticed as well. The organ play performed by Daymour adds this typical solemn and mysterious touch. The work progressively evolves into deeply, poignant and still mysterious passages. The ambient aspect makes it sometimes pretty cinematographic as well.

Some tracks are evoking vague elements of bands like Sopor Aeternus and even Dead Can Dance for the some Eastern inspired “Nikopoia”.

The work of The Devil & The Universe is something really apart from common dark-ambient and other ritual bands. It clearly sounds as an offspring of multiple influences and music genres. It’s not exactly what I would call a chilling work rather than an ‘experience’ in sound, which might be transcendental and even a revelation inciting the listener to explore his own mystical part.

Conclusion: I experienced the new work as more intimate than the previous album while holding on to a very personal sound and ritual strength.

Tags: The Devil & The Universe