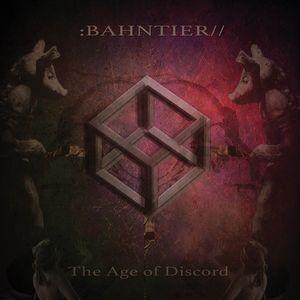 Content: The new work of :Bahntier// first of all reveals that this band set up by Stefano Rossello (Detune X, Ketvector) is still alive. The previous proper studio album (cf. “Venal”) was released in 2008. A band sometimes needs to take a break to find explore new ideas. That’s precisely what “The Age Of Discord” seems to reveal. Justin Bennett (Skinny Puppy, Ketvector, My Life with The Thrill Kill cult ao) and Filippo Corradin have joined in again for this new opus featuring 10 noticeable songs.

I get the impression that :Bahntier// has never been that into EBM! But don’t expect a kind of classical- and /or average and cheap copy of EBM. This project always has dealt with a rather sophisticated sound and that’s precisely what they’ve done on “The Age Of Discord”. There’s a progressive touch hanging over the tracks, which I think might appeal for lovers of FLA. There’s a similar elaboration and especially a great sound intelligence. You can feel certain passion emerging from the tracks to create something different.

Most of the songs have been reinforced by industrial elements, which mainly come through in the rhythm. There’s something dark and bombastic hanging over the work. The production sounds rough and overloaded by judicious sound treatments. “Selfless Toy” is one of the most noticeable tracks revealing great composing skills. In a somewhat different approach, but still with this cool electro-industrial mix I have to mention “Outside Burning” reminding me of Dive, but with a real elaborated structure on top.

Another song I’ve to mention is “Sound Of The Bells”, which is built up with once more great electro-industrial manipulations and elements of EBM, but I here also experienced a dark aspect reminding me of Die Form. :Bahntier// however sounds like a band with a unique sound and approach, which occasionally might remind you of elements that other bands are known for.

Conclusion: “The Age Of Discord” stands for a beautiful return of this old servant of the electro-industrial scene. In my opinion this is maybe their best album to date!

Since you’re here … … we have a small favour to ask. More people are reading Side-Line Magazine than ever but advertising revenues across the media are falling fast. And unlike many news organisations, we haven’t put up a paywall – we want to keep our journalism as open as we can. So you can see why we need to ask for your help. Side-Line’s independent journalism takes a lot of time, money and hard work to produce. But we do it because we want to push the artists we like and who are equally fighting to survive. If everyone who reads our reporting, who likes it, helps fund it, our future would be much more secure. For as little as 5 US$, you can support Side-Line Magazine – and it only takes a minute. Thank you. The donations are safely powered by Paypal.
Tags: Bahntier