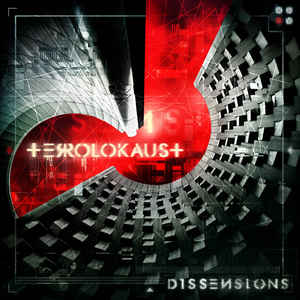 Background/Info: Javi Ssagittar (vocals & lyrics) and Indio (programming & synths) better known under the Terrolokaust moniker are back on track. Their 4th full length album took some time to get accomplished, but they now have 12 new songs ready.

Content: “Dissensions” definitely is their most versatile album to date. Terrolokaust got some recognition as dark-electro formation, which remains their main influence, but they also experienced with other elements. This work moves from pure and impressive dark-electronic standards to a kind of electro-rock mix carried by guitar and sometimes reminding me of Combichrist. There also is a noticeable EBM element with some vague pop elements on top, which might remind to And One.

So in the end we might say that Terrolokaust has exorcised different ‘dark’ sonic demons unleashing a rather diversified opus. The common element between all the songs remains the rage and merciless power. The single calm song of the album –which appears to be a kind of intermezzo, doesn’t really change the furious format “Dissensions” has been made of.

+ + + : The dark-electro cuts and especially the brilliant opening song “Evade All Traps” are worthy of examination; this is made of rage and body-power. The somewhat body-pop minded “I’ve Heard It All Before” is a nice and fully accomplished surprise. Another noticeable aspect is the enraged “Pay The Price”, which might appeal to a tougher audience in search of hard electro-rock music.

– – – : The diversity of the album makes it all a bit confusing. I sometimes get the impression Terrolokaust went in search of a new sound while they remain under the influence of their dark-electro inspiration.

Conclusion: Terrolokaust clearly appears to be a band in movement and maybe in search of a new sound identity, which is not that surprising as the band is already active for a couple of years now. I can’t say it’s their best album to date although it features a few great songs!

Since you’re here … … we have a small favour to ask. More people are reading Side-Line Magazine than ever but advertising revenues across the media are falling fast. And unlike many news organisations, we haven’t put up a paywall – we want to keep our journalism as open as we can. So you can see why we need to ask for your help. Side-Line’s independent journalism takes a lot of time, money and hard work to produce. But we do it because we want to push the artists we like and who are equally fighting to survive. If everyone who reads our reporting, who likes it, helps fund it, our future would be much more secure. For as little as 5 US$, you can support Side-Line Magazine – and it only takes a minute. Thank you. The donations are safely powered by Paypal.
Tags: Combichrist, EBM, Terrolokaust