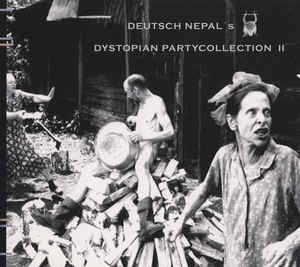 Background/Info: Lina Baby Doll (Peter Andersson) last year took me by surprise unleashing the magnificent “Alcohology”-album. Deutsch Nepal is already back on track, but now with something completely different, but not that new. This work is a selection of mainly rare and forgotten compositions. Most of the cuts were originally released at compilations, singles and/or collaborations with other artists. A first chapter of “Dystopian Partycollection” was released in 2008 on the legendary Cold Meat Industry.

Content: Lina Baby Doll experimented with multiple influences during his long career and that’s an element, which emerges on the surface of this work. I dare to say that the selected songs aren’t featuring the most extreme side of Deutsch Nepal, but an interesting twist between pure dark-chanson, electro-industrial minimalism, great tribal & ritual compositions and neo-folk mixed with industrial elements.

Deutsch Nepal has been mainly inspired by industrial music, but reworked it a very own way, sometimes with a kind of dark subtlelity, sometimes with intriguing and chilling ritual structures and sometimes even into an intimate cabaret-like atmosphere. The common element between all the tracks remain the dark atmosphere and the unique sound creation. A few cuts have been composed together with other artists, sometimes Andersson is just singing on it. I have to mention a real beautiful song together with Navicon Torture Technologies, which is a delicious symbiosis between neo-folk and industrial music.

+ + + : There are several cool songs featured on this ‘party’-box, but the first song I have to mention is the brilliant ‘rape’ (or cover version) of Dolly Parton’s “The Lonely Coming Down” reworked into a ritual and somewhat cinematographic piece. But the main strength of this work definitely is the diversity of the songs and their accomplishment.

– – – : The ‘softer’ songs, which are more into a kind of chanson and cabaret-style (cf. the debut- and final songs) are cool, but definitely not the best ones from this artist.

Conclusion: Deutsch Nepal wants us to party on this special compilation and the only party I can imagine is one with a surreal dancefloor taken from a never-published Kubrick movie.

Best songs: “Victum Vermis”, “In The Other End Of The Bottle”, “The Lonely Coming Down”, “Social Report”.